The Stones Left Behind….

When I visit the graves of my parents and grandparents, I always make sure to leave a small stone–a kind of “calling card” that I was there, remembering.  As a matter of fact, during the traditional cemetery visitation period, prior to the High Holidays, I went to visit the graves of my great-grandparents resting at the American-Austrian Jewish Cemetery in Woburn. I had never been to their graves before and I’m certain no one has been there to say Kaddish in well over 40 years.

As I approached their graves, I felt a deep connection, especially to my great grandmother whom I’m named for.  Having never met them, I only have the stories my mother told me about Hannah and Abram from Austria.

Hannah was orphaned as a small child; living with her mother’s sister who used her as a “scullery maid” in the boarding house she ran. It’s no wonder she married at the age of 16 to Abram, a grocer, so she could escape her living conditions. They lived in Cambridge and they had 13 children! My grandmother, Tillie, was the first born daughter. My grandmother told me that Hannah would say, “See, I’ve given  you lots of brothers and sisters, so you’ll never be alone…”

As I stood there at their gravesite it was clear to me that I needed to introduce myself. I spoke to the beautifully carved monuments, reflective of a life once lived. It was as if I was speaking directly to my great-grandparents. I told them who I was, whose child I was, and how much I knew about them.

I stood there alone on a windy autumn day reciting the ancient words of the Kaddish for two people I had never met, but felt I knew. (I know we’re supposed to have a minyan to recite the Kaddish, but I did it anyway!) It was a wonderful, uplifting moment for me. I felt I did a great mitzvah to their memory. I plan to go back and visit again next year, but this time with my own daughter to introduce her to her ancestors, so she can leave a stone too.

The Origins of Leaving A Visitation Stone

One of the most 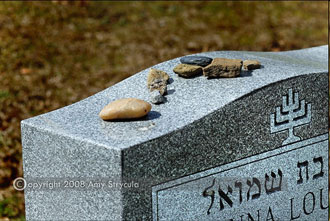 common Jewish cemetery customs is to leave a small stone at the grave of a loved one after saying Kaddish or visiting.  Its origins are rooted in ancient times and throughout the centuries the tradition of leaving a visitation stone has become part of the act of remembrance.

The origin of this custom began long ago, when the deceased was not placed in a casket, but rather the body was prepared, washed, and wrapped in a burial shroud, or for a male, in his tallis (prayer shawl). Then the body would be placed in the ground, covered with dirt and then large stones would be placed atop the gravesite, preventing wild animals from digging up the remains.

Over time, individuals would go back to the gravesite and continue to place stones, ensuring the security of the site and as a way to build up the “memory” of the loved one.

As time passed on, and carved monuments became the preferred memorial, the custom of leaving a visitation stone became a symbolic gesture–a way for the visitor to say to the  loved one, “I remember you…..”.

JCAM provides for this custom on our cemeteries by filling receptacles with small stones for our visitors to leave, so you too, can continue on with this ancient custom of remembering.