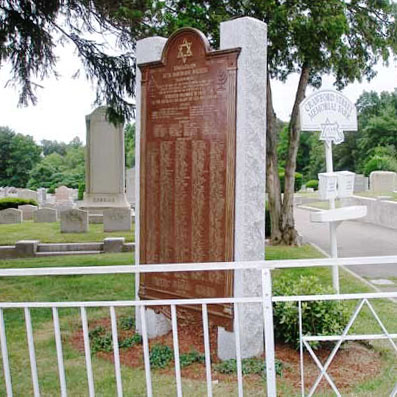 Founder's Plaque at the Memorial Park

Founded as an Orthodox synagogue in 1914, Congregation Beth Hamidrash Hagadol, also known as the Crawford Street Shul, was established to meet the spiritual, educational and social needs of a growing Orthodox Jewish community that had moved from the West End of Boston to the flourishing new neighborhood of Roxbury.  By the early 1920s, the Crawford Street synagogue was one of Boston’s leading Jewish institutions.

The congregation had a membership at the time of around 500 families, an active Sisterhood, Men’s Club, and Junior Council.  And in keeping with Jewish tradition of establishing a burial site for their community, the synagogue Board of Directors set out to locate land that would serve as a final resting place and memorial for its members.

With the shift in demographics that has occurred over the years in many of Boston’s former Jewish neighborhoods such as Roxbury, Dorchester and Mattapan, the Crawford Street Synagogue (Beth Hamidrash Hagadol) building no longer serves as a synagogue. Nevertheless, Crawford Street Memorial Park still stands as an everlasting memorial to those early founders and their dedication to the tenets of the Jewish faith and the richness of our heritage.