July 16, 2018 – Today the Boston Preservation Alliance announced it will honor JCAM's efforts to restore and preserve the Ohabei Shalom Cemetery Chapel in East Boston with a Stewardship Recognition on October 22, 2018, according to Greg Galer, Executive Director. 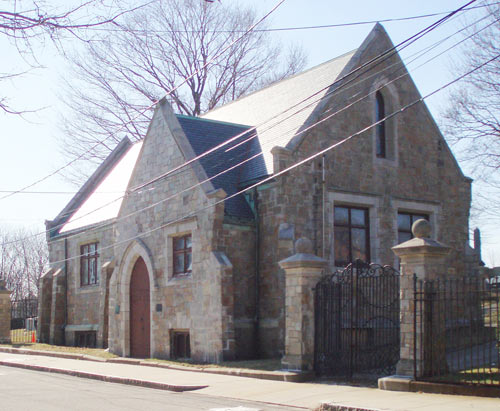 JCAM's Charitable Foundation has been working to restore and preserve the chapel since 2006. The chapel is on the grounds of the first Jewish cemetery in Massachusetts, founded in 1844. This beautiful fieldstone neo-gothic chapel was built in 1903 and is listed on the National Register of Historic Places. It also is a recognized historic landmark by Bostonian Historical Society and Combined Jewish Philanthropies of Greater Boston. It is slated to become an immigration resource center for the Greater Boston community.

The chapel sits on the edge of the 2.26-acre cemetery at the end of Wordsworth Street in East Boston. So far, JCAM has completely restored the entire exterior including the roof, all stained glass windows, gutters, downspouts and all masonry. The architectural firm overseeing the work is Spencer, Sullivan & Vogt.

The project to restore the chapel has been aided by a number of grants, including:

The Boston Preservation Alliance's marquee annual event in October highlights people and projects that demonstrate the highest level of commitment to Boston's historic character. For 30 years, the Alliance has presented awards, but this year is particularly special year as it also celebrates the 40th Anniversary of the Boston Preservation Alliance!

"As neighborhoods change over generations," says the announcement, "it's important that touch points to their past both remain in place and sensitively evolve to maintain their relevance. Old becomes newly pertinent, rejuvenated, present. Engagement with a neighborhood's past both anchors a community and provides a foundation for its future.

"An emphasis on neighborhoods which percolated up from our nominees collectively exemplify what is central to Boston's success: historic places working in harmony with new construction throughout the city's neighborhoods." The 2018 Preservation Award recipients are:

Boston's defining character is a nearly 400-year history of freedom-seekers, refugees, and visionaries; innovators of America's core political, financial, industrial, and educational institutions. The men and women who accomplish all this were and are mostly immigrants. And their immigration story has a physical heart and home – East Boston.

Some have said that East Boston is off the beaten path for a new cultural and visitor center. The JCAM Charitable Foundation believes it is the perfect place to begin exploring historic Boston for thousands of tourists each year. East Boston, was the 2nd largest port of entry into the U.S. in the late 19th and early 20th centuries. What better way to tie in the history of early immigrant groups coming to America, and bringing a new generation of visitors back to East Boston than through the Ohabei Shalom Chapel's Immigration History Project. As a national historic landmark, the refurbished  Ohabei Shalom chapel will be on Boston's tourist maps.

JCAM's goal is to tell this woefully under covered story, from its Protestant, Irish, Italian, and early Jewish roots through the present tales of Boston's 21st-century Asian, African and Hispanic immigrant communities. By locating that story in one of East Boston's oldest historic sites, and through the most modern technologies at the chapel, JCAM hopes both to mirror and unite conversations about immigration that make East Boston's history so genuinely compelling, current and urgent.

The site's proximity to Logan Airport makes this a "do-able" convenient trip. The site's computer-based educational presentations about the immigrant histories and neighborhoods; interpretation of the chapel and cemetery and the congregation that established them; planned self-driving tours of the neighborhoods; traveling exhibitions in other community sites, will all be draws. 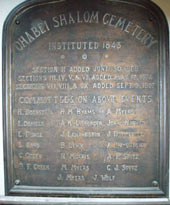